Only two days left toward to the Chinese border. After five days on the transsiberian train I´m used now to all kind of chicken dishes they were offering beside nothing else. During looking out of the train window I was dreaming to become a chicken. A old german song came to my mind: „ich wollt ich wär ein Huhn…“ Suddenly one of my cabin member was tipping on my shoulder and was asking to join in for lunch. I start a big laugher. At the train restaurant we had chicken soup together followed by fried chicken breast. The restaurant service always asking for dollars for the payment and my small money notes were close to be empty. I still had a lot a lot of rubles currency left after my red square black market money changing  and KGB experience. Asking to pay the double price but in ruble currency the service always shaking head to show the no go. The other restaurant guests from the USSR could pay in ruble but the five tourists on the train had to pay in one dollar notes. After lunch we went to an other famous place. The place were the samovar was steaming. In every second wagon was one and it was also a good place for a chat with others while drinking black tea. 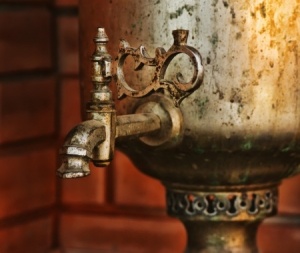 The colorful queue from different cultures in front of  samovar was a kind of meeting point for many who want to get in contact with others and to change information or for examples cigarettes. I was the one who get ask most to change cigarettes because I had tobacco to roll and most all smokers like to have a taste of it. To smoke we had to move to the space between the wagons. Between four and five people could stand there and the air was within seconds full of smoke. Full covered with thick clothes hand in the pockets cigarettes between the lips and the woolly down till eyebrows. The hole body was shivering while crossing meanwhile Siberia. Our smoking ritual became quite short because the temperature at the space between wagons was at least minus 30 degrees. Not even the warm smoke you could feel within the lungs and you got the feeling during breathing out ice cubes falling out of your mouth. After finishing we went always back to the samovar to get a cup hot water for warming our hands and body. I got somehow the impression that collective suffering makes it easier to become friends. Between chicken soup, tea from samovar, smoking in minus degrees and was at least 1-2h  learning Chinese language from a book as well to learn how to handle the chopsticks by fishing single nuts from a box. This was how the days and hours were passing by. Ones or twice a day the train were stopping at stations from cities or villages I never heard about. This was good opportunity to leave the train for few minutes. Like an animal at the Zoo I was running up and down along the platform to move and stretch my body and breath as deep and much as possible the cold fresh air in my lung. Inside the train it the smell was really nauseous. The people of course me as well had no chance to take shower only the small washbasin with icy water from the tap, brhhhh, the hole train was smelling like a Puma cage with no possibility to open windows. Running up and down the platform with bodily gymnastic as much and long as possible were the big highlights every day. Fill lung with fresh air and moving all joints how beautiful such things can be. Until the last whistle of train conductor I was enjoin jumping, running, slide on snow and ice, gymnastic and breath deeply. Around 4pm it starts to get dark in Siberia and the snow white wide landscape changed into a really. A further day was over and only one and half left to enter China border.