I Woke up with the knowledge that we gone to cross the Chinese border today.

In Ulan Bator the capital of Mongolia we had a stop for around 4h one day before. It was allowed to leave train and I decide to walk around a bit. The temperature on this day minus 25 and I walked fast to warm up a bit. After a while I saw a lot of people who were entering an old house. Curious I was following them to see what is happen there. Inside a queue waiting to get served with hot soup and a peace of dark bred. They did not have to pay for it, I mean the food was for free and how the people were looking like their would not have money at all. It was kind of public canteen for free food. After all the days this chicken meals I decide to line up to have taste from what the people were eaten. Of course most all were looking at me with my modern western clothes and were pointing during whispering to each other. I took my soup and the wet dark bread sit down and start to eat. For me was the taste quite ok after all the chicken stuff for 7 days on the train. The fatty soup was warming me quite fast. I went back to the waiting train happy for the change of food I had. All the time I tried to have a deep breath to fill my lungs with fresh air before I was entering the train again. The malodor inside the train was unbelievable because we could still not any window. Outside even with this cold climax was a paradise for the lung. 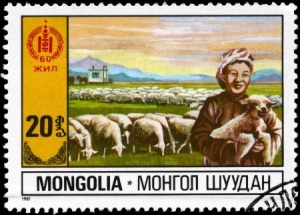 After breakfast I was looking all time out of the window. Nothing special to see since days hahaha only white until the horizon. Somehow I hope something will change when we coming closer to the Chinese border. Of course not. The train was slowing down its speed and then it was stopping at Zamin Uud a small border town. I could see now Chines soldier because we were at boarder to China now. After pass control and the change of the restaurant waggon the train starts its journey again around two hours later.

China here I´m ! Now my really seek for a master can start. But of course first I went to the new restaurant waggon. What I saw and smelled was keeping my mouth wide open.