Still confused while smoking the cigarette, looking around over the mass of people sitting on the floor and waiting for whatever. I could not control my mind anymore because of the circling thoughts. Passport, money and my backpack gone with the leaving train and I´m standing here in the station this can´t be real must be a nightmare. Somehow I saw some signs over a door and I decide to go to this office to ask what going on here. The people where looking at us like we where from an other planet, strange because we are still in Europe. But all this waiting people where looking very eastern like Kirghiz, Mongolian with hole families and so on. 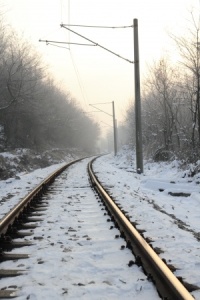 I was entering the office and start to ask what to do. The guy of course couldn´t speak any word english or german. So I explained by hand and feed the situation and he was not even looking surprised. Lifting the shoulder up again and again. After around half hour he just gave us the english transit visa papers without any comment. So what ?now an english written transit visa to fill up but no train hahaha funny people. No money in my pocket nobody speaking any languages I know. After around the third cigarettes from my Japanese traveller friend we recognized that the soldiers with machine guns where standing again in front of the closed door to block it against the waiting people. Few minutes later our train was running in from the direction it was leaving before. I start running towards to the gate jumping over the on the floor sitting or sleeping families. Arrived at the gate I realized, yes indeed it was my train to Moscow. The train was standing now on an other platform. Knocking at the gate to get attention of the soldiers. They where turning around toward to us. I was pointing on me and pointing at the train again and again. They answered with a sign like show me your ticket. By hand and feed and body language I answered: my…..ticket……is ……at…. this….. train…are…you… understanding…..?????? Looking to each other one soldier began to open the gate for us and was closing it immediately behind us to stop the now moving mass of people who like also to enter the platforms. Now I start running to find our coach and the cabin with all my belongings. More closer I came to my cabin bed more faster my heart was beating. Will it still be there? Questions over questions running through my mind. Lifting up my bed pillow and…….. yeah everything was still at its place. Happiness and sadness sometimes very close together. Now finally I also could get my socks on because I was all time barefooted in my boots. Winter minus 10 no heater no socks no pullover only a t-shirt. Yes, yes quite cold even you have survive only around one and half hours. I start dancing with the japanese guy who was still relaxed. After a while happy dancing he stopped it with the words: „I told you already everything will be alright“ he turned around and went to washing room.

Learned lesson: Never leave passport and money belt , keep it always with you