Out of the train station I had to close all articel of my clothing. The wind was frosty blowing and I felt like my face could not make any grimace  because of the minus 20 temperature. Still dark because of the early morning hours and every single breath I took felt inside of my lung like I´m ice cupe machine. Darksome faces were passing me in fast long steps without looking up. It seems to me everybody here is living on its own world. I tried few times to stop somebody for asking the way to the Metro. Very funny try out because nearly nobody was speaking my only two languages I know, german or english. After around thirty icy minutes some could understand what I´m looking for and he was pointing in a direction where to go to find the right Metro line.  During his explanation I was observing his mustache. It was full of icicle and during his talking they were bouncing like small snowmans. His broken english was understandable and I was happy plus grateful for it. Toward to the Metro I was realizing that my way to walk was already adapted to the Moscow people. Head down, looking at foot walk, shoulders up, dog-collar, both hands in my pockets even with hand cloves, once in a while cock eyed from down to check my direction or latern who crossing my path. Suddenly the entrance of the Metro appear and I walked down the step who were covered with half melted and dirty grey snow. Inside of the Metro I saw first time the glorious Metro station and it came into my mind to stop at every Metro station to examine the art. 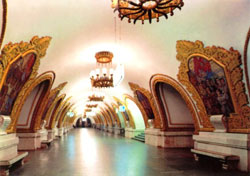 I felt as the only one who are interested to the Metro art the other humans where rushing just through. Then I remember of course I´m tourist here in a fucking cold and busy metropole called Moscow. It was still quite early and think it was around seven in the morning and I was disturbing more or less the flow of workers during my examination of the famous Moscow Metro art. Many time I have got a body check from rushing people on the way to their work. The oldest Metro line from around 1936 this is the one with beautiful arts and I was visiting almost all of the old stations from the thirteen. In and out from station to station after 2h or so my stomach gave me to understand its breakfast time. Still in european mood just go and have breakfast. First time since my arrival in Moscow I started to look for something to eat. Now the real Odyssey was starting. Focused now like a hunter looking for something to eat after hole night and morning without. Looking left looking right all the shops with food have been empty. May be that I´m on wrong side or area of Moscow ? No food store or shop I was passing had anything to offer. My stomach started to roar already like a Lion but no food in sight. It was 1989 and would be better now for me when I had read the news back in Frankfurt. Because this was the year when Sowjet Union had problem with the harvest because the hard weather destroy more the two third of the harvest. It was so hard that even western countries where donating to help the Sowjet Union. This human action was the start of the ending „Cold War“.